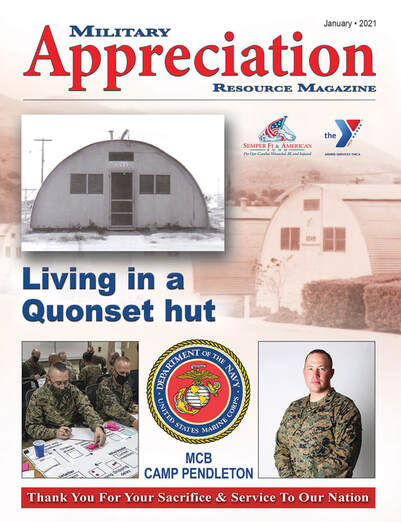 Read E-Edition
WOMEN MARINES ABOARD CAMP PENDLETON
CELEBRATE 75 YEAR HISTORY
OCTOBER 26, 1943 - 2018
CELEBRATING 75 YEARS WOMEN MARINES ON CAMP PENDLETON
The following is a brief view of the lead story in the commemorative publication honoring the 75th Anniversary of Women Marines Aboard Camp Pendleton. We know you are sure to enjoy the photos, timelines, and wonderful stories.

The first hand stories recounted with such care in this beautiful keepsake publication are truly an invaluable opportunity to take in the magnitude of the past 75 year  history of women Marines on Camp Pendleton. They are stories that will be truly treasured and read again and again for generations to come.

We at the Oceanside Chamber of Commerce would like to thank all those involved in this project for their partnership, efforts, willingness to serve and their work to produce this lovely publication. We would especially like to thank the women Marines (and all of our esteemed United States Armed Forces) for their defense of our country and way of life.

And to you dear reader, we would like to say thank in advance for your help in maximizing the reach of these trailblazing women and their amazing stories by sharing the publication  far and wide through your social media, email and digital connections.
Camp Pendleton's Women Marines
by Faye Jonason, Director
Camp Pendleton History Museum Branch
It is said that WRs, or Women Marines, did much more than "Free a Man to Fight" in World War II. Volunteering to serve in positions as typists, clerks, bookkeepers, radar technicians, telephone operators and truck drivers, these women replaced nearly a combat division.

Following President Franklin D. Roosevelt's dedication of Camp H Pendleton, then the world's largest Marine base, and its feverish construction, it was decided to relocate incoming Women Marine Reserves. Thirteen months after the base's dedication, on October 26, 1943, the first contingent of 95 women Marines (2 officers and 93 enlisted Marines) arrived on Camp Pendleton. These women where just a part of the 23,000 Women Reservists who entered active duty during World War II.

READ MORE
CAMP PENDLETON 75TH ANNIVERSARY
​COMMEMORATIVE PUBLICATION
SEPTEMBER 25, 1942 - 2017
CAMP PENDLETON MARINE CORPS BASE CELEBRATES 75 YEARS
The Oceanside Chamber of Commerce and the Camp Pendleton Marine Corps Base Historical Society partnered to produce a keepsake magazine to commemorate the 75th Anniversary of Camp Pendleton. A kickoff celebration was hosted at the Oceanside Chamber of Commerce in January 2017, to celebrate the successful completion of the Camp Pendleton 75th Anniversary Magazine. The Chamber's media launch party was memorialized with a brief series of videos published to the Oceanside Chamber's YouTube Channel and website.  Attendees included elected officials, Government staff members, local VIPs, media, members of the business community, and advertising sponsors, whose generous support made the publication possible.

Chosen specifically due to its advantageous location including proximity to the Pacific Ocean, President Franklin Delano Roosevelt, dedicated the Camp Pendleton Marine Corps Base on September 25, 1942. Under the command of General Joseph Fegan, the base was named after the late Marine Major General Joseph H. Pendleton, an illustrious figure in early California military development.

Dick Rothwell, President of the Camp Pendleton Historical Society, gave a series of public talks to share details of the 75-year history of the base, and its early beginning as Rancho Santa Margarita. The military commemorated 2017 with base tours, a series of celebrations, and by gifting a copy of the tribute magazine to each attendee.