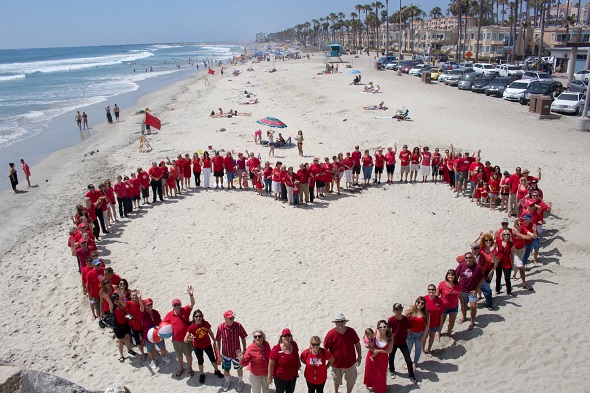 On June 22, 2015, members of various groups got together to show their love for Oceanside.  The group included Oceanside Chamber staff members, Visit Oceanside, Oceanside Parks and Recreation, MainStreet Oceanside, Event Media and a few of our closest friends.  This photo was taken to help promote tourism in February of 2016 for the new "Oceanside Valentine's Week" campaign.  Oceanside kicked this campaign off with an “I Love Oceanside” heart just north of the pier.  We hope it will be the first of many such photos and that the crowds will get progressively larger.

Oceanside’s Park and Recreation manager Eileen Turk helped to organize the crowd into the heart shape with never-ending enthusiasm and the help of a bullhorn.  (Read more about Eileen on page 38)  Photographers were staged on the Oceanside Pier and two drones flew overhead to capture the images.  The Oceanside Chamber’s photo went viral immediately with an overwhelming response on Facebook and Twitter.

The goal is not only to increase pride in Oceanside but to provide a boost to tourism and local businesses by making Oceanside the perfect place for couples looking for a romantic evening, a weekend getaway or a vacation destination during Valentine’s each year.  We hope to involve the community in Valentine Themed Promotions/Projects and to identify Oceanside as “America’s Valentine City.” Proposed projects include, a Bike Ride and 5K Run/Walk, Art displays in museums and schools, romantic plays and movies, lighting the Oceanside Pier in red, and perhaps going for the World’s Record for the biggest heart!